Appalshop held its inaugural WMMT Girls Rock Camp, the first of its kind in eastern Kentucky and the rural southeast in late July, 2018. After a packed Showcase to culminate the week-long camp, gaining official membership to the national Girls Rock Alliance, and a successful Feminist Friday sponsored benefit show,  a second Girls Rock Camp is in the works for July 29-August 3, 2019.

The Camp’s mission is to empower girls, gender-nonconforming, and transgender youth by providing an inclusive community which fosters self-expression, confidence, and collaboration through music education and performance. In a week-long summer session run by adult community volunteers, campers gain meaningful life experiences of problem solving and social justice awareness in a creative, supportive environment.

The Girls Rock Camp Alliance, an international membership network of youth-centered arts and social justice organizations, has worked with community hosts to establish camps in over 90 sites across the US and globally, from Helsinki to Lima, Tokyo, and London. Girls Rock Camp organizers say that their work “is a direct attempt to amplify voices that have otherwise been told to be silent. Music, art, and creative expression are our tools in building a loud, celebratory, and formidable movement.”

Despite their growing popularity, however, few Girls Rock Camp chapters are available to rural youth on any continent. Appalshop and the Girls Rock Whitesburg organizing team are working to change that.

“Appalachia is known for its strong traditional and progressive music cultures,” says Elizabeth Sanders, WMMT’s General Manager. “From Whitesburg’s Passing the Pick and Bow after-school program to southeast Kentucky’s thriving punk scene, our hills truly are alive with the sound of music. Yet representation of girls and women remains the exception, rather than the rule, in every professional musical genre.”

Sanders says that Appalachia’s rich musical culture is not exempt from this uneven dynamic: “Both [folk and punk] cultures, which are very much related, are dominated by men. If our Camp’s first year was any indication, this is a way to change that.”

Girls Rock Whitesburg Camp is open to youth aged 12-18 from Letcher and neighboring counties. “Because gender representation is a complex issue that involves more than just girls versus boys,” Sanders explained, “we welcomed gender fluid, non-binary, and trans youth to the Camp, as these groups are traditionally underrepresented.” 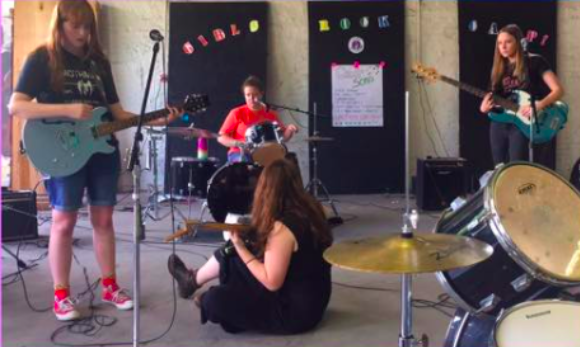 Now that Girls Rock has grown wings locally, it will rebrand as Girls Rock Whitesburg and move forward using an all-volunteer base, with WMMT remaining as a sponsor. More than 50 individuals and organizations donated time, instruments, resources, food, and more to support the 2018 Camp; many have offered to do so again. Girls Rock Whitesburg will also continue to work with local businesses and organizations to solicit in-kind and/or monetary sponsorships to provide Campers with meals, instrument loans, and other needs.