At the end of 2016, new research on black lung cases were released through NPR and featured in the New York Times, among other national outlets. Benny Becker, reporting for WMMT in partnership with the Ohio Valley Resource, worked with Howard Berkes of the NPR Investigations Unit to produce the report and share local impacts through the story of a Pike County family.  Their research has since found its way into multiple bills submitted in Congress that hope to improve monitoring, treatment, and prevention of black lung disease here in the central Appalachian coalfields.

Howard Berkes has been reporting on black lung disease since the Upper Big Branch Mine disaster, where autopsies revealed a shocking rate of black lung among the miners killed in the explosion. Benny started working with Howard because he needed help gathering data from county clerks about the back taxes owed by Jim Justice, now the governor of West Virginia.

As Benny reports, “Pike County is in the heart of the central Appalachian coalfields, and it’s home to the offices of Dr. James Brandon Crum, a radiologist who often reads the lung X-rays of coal miners. Last July, he reached out the National Institute of Occupational Safety and Health (NIOSH) because he’d noticed a disturbing trend among his patients.”

One of the researchers tipped off Howard Berkes who realized other clinics around the region might well be seeing similar issues. So Benny, Howard and others with NPR and the Ohio Valley ReSource worked together to get data from black lung clinics around the region. They found more than ten times as many cases of the most severe form of black lung disease than federal monitoring had shown. That means the rate of severe black lung disease here in central Appalachia is worse than it’s ever been. The terminal disease is also affecting miners at younger ages than ever before.

“According to a National Institute of Occupational Safety and Health (NIOSH) study published in December, Crum found the worst form of black lung disease in 60 patients in a period of 20 months. That’s more cases than the NIOSH black lung surveillance program had identified nationwide since 2010,” Benny reported. “The study also suggests that the recent downsizing of the Appalachian coal industry could be playing a major role in this new spike of diagnoses. In today’s coal landscape, laid-off miners have little hope of getting rehired, and that’s created a new incentive for miners to get tested and apply for benefits.” 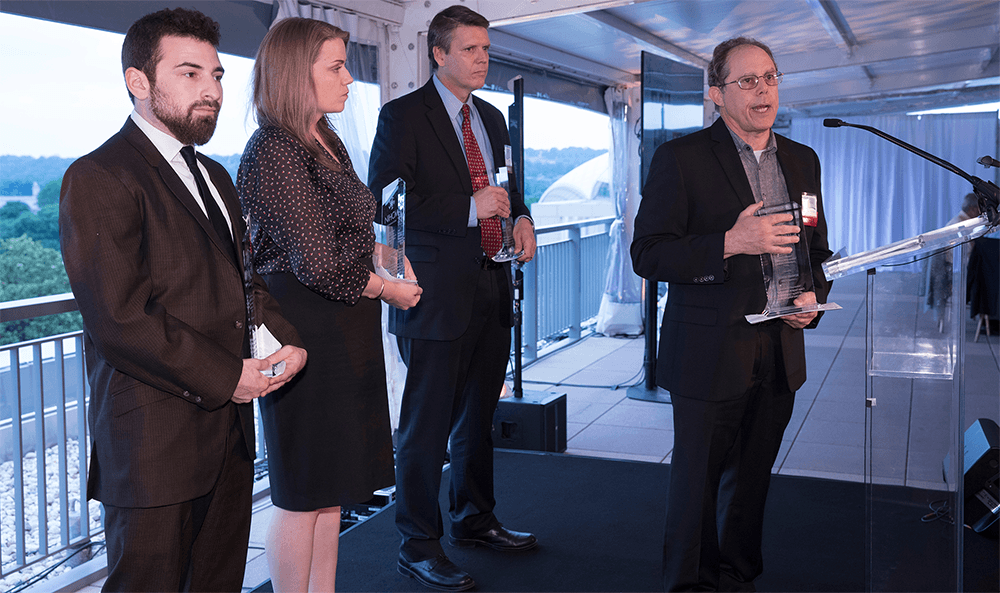 Now, Benny Becker (left) and Howard Berkes (right) have received three national media awards for their reporting. The first of those to be given was the 2016 National Institute for Health Care Management Television and Radio Journalism Award, which they are pictured above accepting recently in Washington, D.C.  Other awards for this project include the 2016 Investigative Reporters and Editors Award for Radio/Audio- Large Market and 2016 Society of Professional Journalists ΣΔΧ Award for Investigative Reporting (Radio- Large Market).